Earn extra money by being a strawberry picker. Information about farm fruit picking jobs and rates of pay: 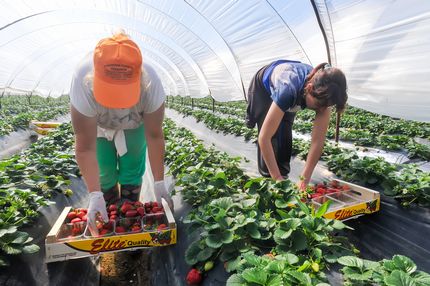 The season in the UK depends on the weather but this generally lasts from May through to August. During this time they are looking for seasonal workers to pick strawberries for cash payments. They will usually be paid either a standard hourly or daily rate of pay rather than the traditional paid per kilogram or pound weight. This usually depended on the daily market value and could have changed each day.


New legislation protects the strawberry pickers to ensure they have a fair wage. For example those in Scotland are protected by the Agricultural Wages (Scotland) Order (No 66) 2019 and should expect the minimum hourly rate for all workers which for 2019 and 2020 is £8.21 up to 26 weeks and £12.32 for overtime. Overtime must be paid when an employee does over 39 hours per week. The employer must provide the worker with a timesheet on which they can record their hours each day. See
scotland.gov.uk/Topics/farmingrural/Rural/business/18107
for more terms and conditions that can apply.

Some do have a regular contract with shops, supermarkets and factories so may secure a constant rate of sale and can pass this onto their employees by offering a better and seldom changing rate of pay.


Other farm jobs may be available which can include checking, weighing, making jam, packing, labelling jars, selling in the shop, etc. Employers are required to provide employees with a written statement of particulars of their employment within 2 months of commencing employment and such work should be included in these written statement of particulars.


Some employ overseas students or those who travel throughout Britain looking for strawberry picking work. They will provide accommodation for agricultural season workers which can vary from staying in the farmhouse, camping in a field in your own or provided tents or a caravan. If you do stay in provided accommodation you should get access to a toilet, shower and kitchen. Some even provide a community room with a television, video, DVD player, etc. This accommodation could be for free to entice them to come to them, or there may be a daily charge. This should by law be capped and as an example, Scottish employees should not be charged more than £5.35 for each day of the week in respect of accommodation other than a house.

It is physical and is not suited to some people with disabilities. It is a great way to lose weight and get exercise whilst you earn. Even if you eat some along the way you probably won't put on weight due to the high water content. Do wear a sun hat and apply sun cream regularly to protect yourself from the sun and drink plenty of water throughout the day. This is especially important for people who are not used to being outside in an open field for several hours at a time. Do also pack warm clothing and clothes suitable for rain. It is the responsibility of the employer to ensure that their staff are provided with the weather protective clothing which they need.

It is seasonal work and you usually have to stop if it rains. You may or may not be paid for this time, or given alternative indoor employment. This will be detailed in your written statement of particulars. Most see this as casual but you should still get a contract of employment. You should also get perks like holiday or sick pay, this entitlement depends on the number of days that an employee would be expected to do in the course of a regular week. This should be declared on your annual income tax return. The employer should deduct income tax or national insurance payments.

Pick Your Own Strawberries


If you have pick your own strawberry vacancies or a situation for an agricultural worker you would like filled then please e-mail me with details of where it is and whom to contact, rates of pay, conditions etc and I will list them on this page for free.

I would particularly like to hear from strawberry farmers in the Hythe Kent area and the South East, Essex, Lincoln and Hertfordshire regions.

Last year looked to be getting to a good start with lots of April sunshine in spring with unusually warm weather. They were blooming and they were stocked nationwide in stores such as Tesco and M&S. Those in Scotland and England were advertising fruit picker jobs early. Sadly the run of good weather did not last and in late May there were strong winds affecting parts of England and Scotland, with gusts reaching between 70 and 100mph, and heavy rain. Loss of crops, poly tunnels and plastic sheeting affected their yields with losses reported that ran into the tens of thousands of pounds. Some reported that replacing poly tunnels, plastic sheeting and other losses would be about £12,000 per acre.

We are not sure how this will affect 2016 and the rates of pay. There are already reports that these May storms affected those about to be delivered to Wimbledon for the tennis season from farms in Angus, Perthshire and Fife. It is already anticipated that the crop losses throughout the United Kingdom caused the cost of punnets in the shops to rise.

Once again there is a worry that fruit picking jobs would go largely unfilled leading to them rotting in the fields and creating a shortage. There is a warning that a possibility exists that this could even effect the supply at Wimbledon that usually sees over 27,000 kilos of strawberries and about 7000 litres of cream sold each year. They are said to be on the decline because of the reduction of foreign students being allowed into the United Kingdom under the Seasonal Agricultural Workers Scheme (SAWS). Non European Union (EU) nationals are refused entry into Britain under a new rule under SAWS which is now restricted to nationals from Bulgaria and Romania.

The NFU have appealed to the Home Office requesting they allow an extra 5000 students into Britain for the season.


Recently growers around England, Scotland and Wales faced a shortage of staff wanting jobs because they are not able to fill their vacancies. It seems to have been caused by not enough students from EU countries coming across to Britain to perform this traditional summer job. In addition fewer immigrants from Poland and other Eastern Europe countries have been reluctant to come across to the UK. Many are having to leave them to rot because they do not have enough people to pick them. A particular worry is that this will cause a shortage in the supply in supermarkets and during peak demands such as at Wimbledon when tennis fans enjoy their traditional strawberries and cream.

Another problem is that spring was unusually warm and the heat caused plants to mature early which has been out with the holidays of students who make up a high percentage.


Radio 4 broadcast a programme by Jenny Cuffe from a Warwickshire farm. She discussed the shortages with the owner and his manager from Australia and the advantages of using foreign students from Poland and migrant workers from other countries. Jenny Cuffe also talked about the problems they face because there are less people wanting fruit picking work and how his crops are being left to rot because of the longer growing season and the shortages. The manager used an agency for fruit pickers who recruit from the European Unions. They face problems like only being able to get the 50 employees that day if they can provide a bus. There are less Polish students because the season was early because of good Spring weather and the season not coinciding with the summer holidays of the students. In addition more foreign students are now employed in bars and pubs around the UK and few English, Scottish or Welsh students are prepared to strawberry pick when they can go elsewhere doing 9 to 5 for a better wage now that the minimum wage has been increased.

Despite adverts in local newspapers throughout Britain few, if any, British people apply for these roles. Many it seems are put off by conditions that have been reported in national press. This included not being paid because of the condition of the harvest and the conditions of accommodation in the caravans. Yet the those interviewed on the radio programme described how much they love it because they are in the fresh air and the pay is better than their normal day jobs.

Some agencies have been able to bring people from the two new European countries of Bulgaria and Romania whilst others have those from Russia and Ukraine who are keen to do this not just for the money but to learn the trade so that they can bring new knowledge to their own countries.

The labour shortage means that production targets are not being met and supplies to supermarkets are falling. The shortfall in the UK is compounded because foreign students are choosing to go to Holland and Spain. Ultimately this means that stores are having to import from overseas to meet the demands of shoppers.

Listeners were described the best way to protect the back and secrets of choosing the best. Most can achieve 10 kilos per hour


If you have a farm work vacancy then please contact me for free listing.

Pick Your Own Farm

A pick your own farm may not appear to need much staff but sadly many owners are finding that families go and eat them there and then without paying, or only paying for one punnet. One in Cambridgeshire in June has had to stop pick your own strawberries after 40 years of business because of the behaviour of his customers. He reported that families would go to his fields with a container of water to wash the strawberries and pots of cream to eat them in his fields as if on a picnic. He described how some families would then cheekily just pay for one punnet with cream and strawberry marks on their faces. He could no longer afford this loss after spending thousands on crops and seeing little profit.